MGA has provided innovative solutions to the auto industry for crashworthiness development for many years.  As frontal, side, and rear impact procedures were advanced and implemented, MGA has added capabilities and additional facilities to help the industry in meeting these requirements.  Currently, facilities in Wisconsin and Alabama are actively working with customers to evaluate vehicle crash performance.  Over the last decade or so, rollover protection has been a particular focus for the auto industry and specific capabilities have been developed to assist OEM’s in this area. 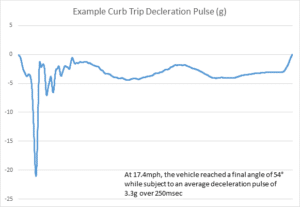 In 2017 there were 23,708 passenger vehicle occupant deaths in the US (per IIHS). Rollovers occur in only about 3% of all serious crashes, yet they account for about 30% of people killed while riding in a passenger vehicle (Consumer Reports, April 2014). While this number has been reduced from 35% in 2010, you are still more likely to be injured in a rollover accident than any other type of crash. Vehicle manufacturers work to mitigate these risks through due care testing as well as compliance requirements. MGA performs hundreds of rollover tests per year to help our customers understand deployment conditions for restraint systems.

According to Consumer Reports “a single-vehicle rollover is usually not caused by a steering maneuver. Instead, the vehicle usually has to "trip" on something, such as when it swerves into a curb, pothole, or a soft roadside shoulder. The government has estimated that 95% of rollovers result from trips.” (April 2014)

One of the popular methodologies used to simulate “real world” rollover scenarios is a soil trip test. In order to perform this test, the vehicle is positioned on a low-lying, flat, and towable cart that is covered in a low friction material. The cart/vehicle then travels perpendicularly down the crash track with the cart finally impacting decelerators. As the cart is stopped, the vehicle then continues its motion into a large sand box. The leading edge of the vehicle contacts the sand and results in the vehicle rolling about its “front to rear” axis. 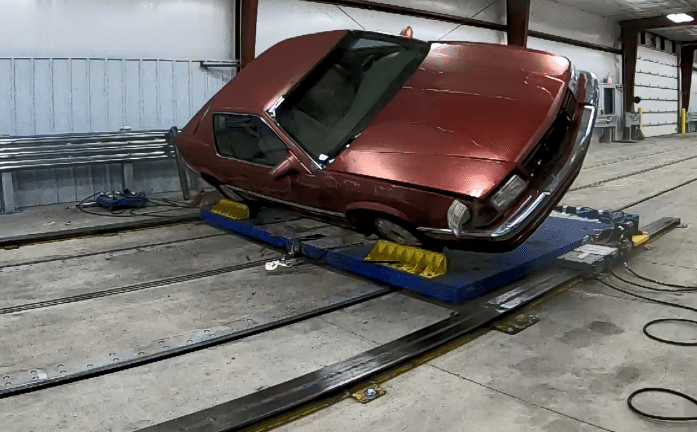 The curb trip test is similar to the soil trip. Test setup is nearly the same, however, instead of the vehicle transitioning into the sand box, steel curbs placed at each tire (yellow fixtures in picture) provide the “trip.” This test also introduces a higher lateral pulse into the vehicle, representing a solid “real world” event such as curbs or other low lying vehicle tripping hazards.