Even with these changes, the approach to pedestrian safety varies globally. In places where there is a much higher density of foot and bicycle traffic, these regulations are being relied on to help save lives and mitigate debilitating injuries. Even where pedestrian traffic is low, these new technologies are still being introduced. In 2013, the World Health Organization (WHO) declared “More than 270 000 pedestrians lose their lives on the world’s roads each year accounting for 22% of the total 1.24 million road traffic deaths. WHO is calling on governments to take concrete actions to improve the safety of pedestrians.”

With these various approaches, essentially pedestrian protection relies on several simultaneous events that include both the pedestrian, driver and vehicle. Of course, people should look both ways before crossing the street, wear personal protection gear, and well-reflected gear to avoid being struck. A driver being distracted is continually counted among the highest statistics for accident occurrence and fatality rates. These rely heavily on humans doing the right thing. 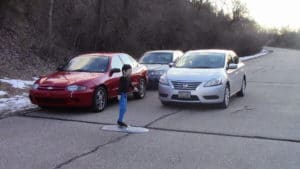 Regarding vehicles however, so much new technology is being evaluated, invented and created that will make it more difficult for a car to hit a pedestrian or cyclist in the future. Crash avoidance between vehicles has been further developed to include much more of the area around the exterior of the vehicle. As mentioned above, requirements for Advanced Emergency Braking (AEB) as a requirement instead of an option has been adopted by several regulatory agencies. Sensor development for detecting a large number of objects is constantly being perfected by using advanced technologies in cameras systems and sensors.

MGA’s long history in occupant protection lends well to supporting pedestrian protection testing from impact tests in the lab to driving maneuvers using the industry 4a “walking pedestrian” dummy to full-scale crash avoidance evaluation. MGA engineers have spent time in Europe training on Pedestrian Protection procedures. This intense training allows MGA engineers to provide our customers with the latest in testing technology and standards. With the upcoming addition of the aPLI to the Euro NCAP protocol, further training will be held.

MGA’s test facilities in WI and MI offer testing to the current head and legform impact test protocols including TRL and FlexPLI legforms. New adaptors for the aPLI are currently under development in anticipation of the new legform being available at the end of 2019.

In addition, MGA WI conducts many other pedestrian-related tests including frontal crash avoidance, sensor development and object recognition.  Industry 4a walking dummies are used to evaluate a vehicle’s forward collision avoidance system when it comes to pedestrians and vulnerable road users.  These are not used to evaluate injury criteria or damageability to a vehicle’s front end. As of now, MGA conducts several parts of the IIHS and proposed USNCAP AEB regulations.

Sensor development includes the fusion between piezoresistive and piezoelectric accelerometers, pressure tube, radar, LiDAR, fiber optics, and stereo and mono camera data.  MGA provides critical data to our customers in support of their algorithm development.  Along with this data MGA uses GPS to track vehicle and their target impactors.  Cones, barricades, various objects, etc. are placed on the track and then vehicles are driven into them at given speeds to evaluate Forward Collisions Avoidance systems.

Our engineering staff have worked with OEMs and suppliers for decades on pedestrian testing. As we continue to learn about these new technologies, the test devices, equipment, sensors also have to be improved to meet the new guidelines. The ever-changing landscape of occupant protection will lend itself to many advancements in engineering technologies for years to come.