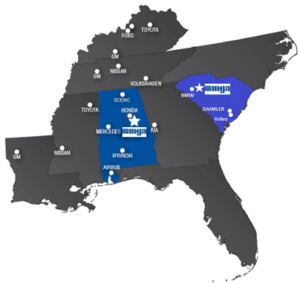 Since the 1990s, several major OEMs have taken up residence in Alabama, Georgia, Kentucky, Mississippi, North Carolina, South Carolina and Tennessee. The South has seen significant automotive growth with an approximate 300% growth in automotive manufacturing in Alabama alone, based on employment, since the year 2000. As the automotive industry has grown in the region, MGA Research has been there to meet its testing needs. With great success in both the government and private sectors, MGA began facility expansion in 2008 in order to support the industry trend, which has seen rapid expansion of automotive manufacturing in the Southeastern United States. This expansion in the Southeast started with our facility in Greer, South Carolina followed in 2014 by our green field facility in Lincoln, Alabama.

Together, these two facilities provide a unique service package that is one of a kind in the region. Testing services range from materials composition and environmental work to crash testing. In fact, between the two facilities, MGA has two accelerator sled systems and a full vehicle crashworthiness test facility: the first and only dedicated facilities serving the industry in the southeast. MGA’s testing expertise dates back 40 years with a history rooted in advancing automotive safety. From the first implementation and use of airbags to the modern-day active safety technologies, MGA has positioned our people and equipment to support the ever-growing industry needs of today and tomorrow. 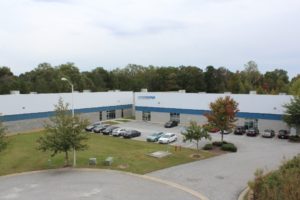 Our South Carolina facility has recently undergone significant expansion with the opening of a new 36,000 square-foot building in 2017 and the addition of several key safety and durability capabilities relating to seating and interior components. The first of these additions was a dedicated space for seat and safety testing which includes equipment to test to major government safety regulations, including FMVSS and ECE standards. The facility houses an accelerator sled for component-level dynamic crash simulations, an anchorage frame for force loading of components using hydraulic cylinders, a head restraint test frame for determining the energy absorption of head rests during a crash, two frames for testing the ability of components to withstand dynamic impacts, and several environmental chambers for temperature-controlled airbag deployments.

In 2019, seat testing capabilities were expanded again to include cushion and bolster durability tests such as jounce & squirm, ingress/egress, and seat fatigue. General durability capabilities have also grown with the addition of four electrodynamic shaker tables for high frequency single-axis vibration, a multi-axis simulation table (MAST) for low frequency vibration with six degrees of freedom, photogrammetry and 3D scanning equipment for dimensional analysis, and several environmental chambers including a solar simulation chamber.

MGA Alabama’s component testing capabilities and equipment mirror that of our South Carolina lab including a 12” accelerator sled and other equipment related to seat safety and other component durability. Seating capabilities include a full range of static and dynamic safety, airbag deployment, head restraints, fatigue, and custom durability, including environmental aging. The broad range of equipment and capabilities led us to a rapid expansion of our support for other suppliers in the region, including interiors, exteriors, and chassis/suspension suppliers. In addition to its component capabilities, Alabama houses a full-scale vehicle crashworthiness facility.

MGA Research Corporation’s crash testing expertise dates back 30 years to the acquisition of our proving grounds facility in Southern Wisconsin, which now houses the updated Vehicle Safety Center. The facility has supported and contributed significantly to the immense advancement in vehicle safety. MGA Alabama is a full-service test facility and the first MGA facility to combine full vehicle crash capabilities with component level support for Tier 1 and Tier 2 suppliers. The addition of Alabama’s crash capabilities has pushed MGA’s total crash test capacity to over 1,000 tests per year.

Currently the facility is supporting the industry with a variety of test modes, and is equipped for most frontal, side, and rear impacts, including many NHTSA and FMVSS modes. An updated lane enclosure was completed in early 2017 to include MGA’s newest in-ground rail system providing lateral vehicle guidance without obstruction at the impact site. The facility features two crash lanes: one ending at a rigid concrete barrier and one ending at an open concept building featuring a rigid floor system for mounting barriers, MGA’s “Strongfloor” system.

The location of the facility in the town of Lincoln, Alabama is strategic for the support of the future of our industry. Our site is less than one mile away from the Talladega Superspeedway, the infamous NASCAR racetrack. This proximity, along with a strategic partnership, may offer OEMs diverse options in terms of evaluating active safety features and advanced driving systems into the future.