MGA Supports the Advancement of the Mass Transit and Rail Industry

Over the past decade, the mass transit industry has grown to be a popular form of transportation for the daily commuter and leisure traveler alike. Mass transit infrastructure provides the public with a cost effect, eco-friendly and safe alternative to privatized transportation. With its growth in popularity, the American Public Transportation Association (APTA), has conducted several studies to evaluate the safety of mass transit when compared to travel through use of private automobiles. Respectively, their findings showed that mass transit (buses) and commuter rail (trains) are 10 and 18 times safer per mile, than by travel with an automobile (APTA Study Says Higher Transit Use Results in Fewer Traffic Deaths, AASHTO Journal). Since its foundation in 1977, MGA has made significant advancements in equipment and technology to provide accurate data for some of the world’s most advanced test protocols. 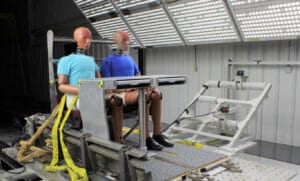 Over the years, MGA has had the opportunity to work closely with government and industry to conduct a variety of testing and evaluations, which have been used to steadily enhance safety standards across the transportation industry. MGA has the capability to perform mass transit and rail testing at almost all of our facilities throughout the world. Although, the facility in Greer, South Carolina was selected to be the hub for spearheading this initiative. 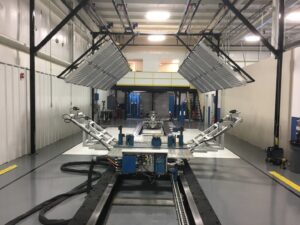 In 2017, MGA installed an Accelerator Sled Test Facility at its South Carolina operations to complement the existing materials, quasi-static and durability test cells, which were already in place to support the local mass transit and rail suppliers. The addition of this sled test facility has proven to be an effective tool for government and industry as they look at adapting advance dummies. These advanced dummies such as the THOR-50M, help test modern seating configurations and furniture like workstation tables, to help understand how to protect occupants in commuter rail systems in the event of a sudden impact.

With years of testing experience, advanced dummies, and the latest equipment, MGA South Carolina geared itself to support the advancement of the mass transit and rail industries. MGA stays committed to its customers as we strive to expand our capabilities and maintain our high level of excellence in every test we perform.