OMDB and the Future of Crashworthiness

The National Highway Traffic Safety Administration (NHTSA) has been developing a new crash test procedure with the purpose of reducing fatalities and injuries in small overlap and oblique crashes. Their crashworthiness research shows a higher risk of injusry in crashes where the occupant is moved in an oblique manner. NHTSA’s investigation (DOT HS 811 202) of frontal crashes with belted non-ejected occupants between 2000-2007 show that the largest number of fatalities occurred in crashes involved poor structural engagement between the vehicle and its collision partner. The Oblique Moving Deformable Barrier (OMDB) Impact test will help to expose vulnerabilities in vehicles during oblique and small overlap crashes. MGAs’ crashworthiness team is equipped to perform this test and as it becomes a larger part of vehicle crashworthiness development. 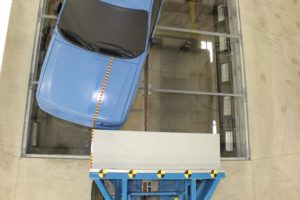 The OMDB Impact test is conducted as follows:

MGA has developed extensive crash facilities in our Wisconsin and Alabama operations.  These facilities have been developed based upon a strong collaboration between our equipment design and testing groups.  Traditionally, crash facilities were designed specifically to conduct only frontal fixed barrier or moving cart side/rear impact scenarios.  As the requirements evolved, MGA developed an “open concept” approach to crash testing. The open concept crash facility allows for a broad range of test setups and space for high speed impacts, and the increased tow motor capabilities permits heavier vehicles and carts to be towed. MGA’s equipment team have fabricated the OMDB cart using the NHTSA drawing package, and we have performed multiple trials tests to evaluate te of thes test procedure. Through these trials, we were able to make improvements to the cart design which has helped the industry.

MGA is equipped with THOR 50th Male ATD’s at the most “up to date” build level (build level B) to ensure our customers get the data related to updated procedures. The THOR ATD has enhanced biofidelic features and additional instrumentation than the standard HIII 50th used in current NCAP procedures. MGA performed crash tests and collected data with Hybrid III dummies equipped with THOR lower legs, which helped in the development of this ATD.

As the industry continues to implement the OMDB impact test procedure, MGA is well equipped to perform this testing to continually increase the safety of vehicles on the road today.